ESL songs are designed to play upon an individual’s love of music to aid in learning the English language. There are many advantages to this method, which in some ways is a multi-tasking teaching method. 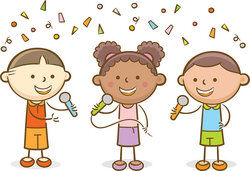 Benefits of ESL Songs in the Classroom

Aside from the basic knowledge that is contained within the song, such as the letters of the alphabet or numbers, the added benefit of song lyrics is that they give the student an opportunity to practice pronunciation and emphasis. Even if they don't understand all of the words surrounding "Now I Know my A-B-Cs", repeating them will assist the formation of consonants and vowels in the English language.

ESL songs also make use of the mnemonic device of both rhythm and melody to give them a deeper-than-surface level retention of the information. Even native English speakers will still hum the A-B-Cs when trying to file papers, simply because it's easier to remember if "P" comes before "R" when singing that part of the alphabet song.

Poetry as a Teaching Tool

Songs aren't the only tool for ESL teachers. Short poems, similar to nursery rhymes, also contain the rhythmic syncopation that can help someone remember. For example, when learning months, the following rhyme can be useful:

This song has one disadvantage - all the months are not listed, nor are all the day totals. A common temptation would be to try and expand the rhyme to contain more information:

All the rest have thirty-one

Except on Leap Year

When it has twenty-nine

Obviously, this loses some of the mnemonic power of the initial rhyme. Even though it does contain more complete and accurate information, it is only memorable by its ludicrous nature.

The power of ridiculous situations should not be dismissed as a tool of teaching, especially for adult ESL students. If an adult class is taught a song such as "The Farmer in the Dell" in a serious way, it will communicate a lack of respect for their intelligence.

In order to acknowledge the fact that the student is a competent, intelligent adult, the songs should be acknowledged as useful tools, nothing more. Presenting them as a silly but necessary stepping stone to the student's fluency creates a more student-friendly learning environment.

Use a Variety of Songs

A long list of children's songs, many with lyrics and sound files, is available through The Teacher's Guide. These are not specifically designed for ESL language teaching, but all contain the numbers one through five in various formats to fit the interest and background of the class:

An additional resource is Songs for Teaching, which contains various subjects directly applicable to teaching conversational ESL English and vocabulary.

An alternative technique would be to use songs that are not designed for children but which still contain useful information. The Beatles' "All Together Now" contains letters, numbers, and colors, as well as an increase in tempo that helps exercise the muscle memory in the students' mouths and voice boxes.

With the proliferation of pop music, it can also be useful to re-write lyrics to popular songs to be used for learning. Before giving recordings to students, however, all copyright laws should be observed.

Aside from copyright issues, there are a few other possible disadvantages to using songs for ESL education. While it's easy to find out what songs are appealing and memorable to individuals, in group situations there may be some students who are more challenged by the melody than others. In this situation, a student may become frustrated by their own lack of musical aptitude, and the song becomes more important than the subject matter. It is important that these students do not become ostracized or ridiculed by the other students – at that point the teacher should simply drop the song and find a different tool than ESL songs.