In ESL, past tenses can be a challenge. This is true in written grammar, but it is an even bigger challenge when it comes to pronunciation. Problems come from trying to form English words while using the consonant and vowel sounds of a foreign language. With practice, this is not a problem, but it takes work to get there. 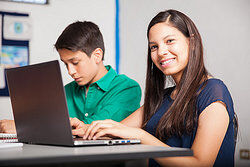 Forming the Simple Past Tense of Regular Verbs

When ESL students first learn to form simple past tense verbs, they learn to add an "-ed" to the end of the base verb form. For example, "walk" becomes "walked." Pretty simple, right? Not so fast.

These same students, who have diligently added that "-ed" to the end of their verbs, see it as forming an extra syllable. Sometimes it is a holdover from their own language, sometimes it is something that they observe for themselves, but either way they frequently end up pronouncing it.

If that was where it ended, things would be a lot easier. What makes it more difficult for ESL learners is the fact that, like everything else in English, there are exceptions to this rule.

In this case, it means that there are words where the "-ed" sound is pronounced. If a word ends with the sound of a /t/ or a /d/, such as the word "want," that additional syllable is necessary. "Wanted" is then pronounced "wan/tid/."

All the ESL student needs to remember is that pronouncing the /id/ ending is only appropriate when used with verbs ending in either a /t/ or a /d/ sound. This is the only circumstance under which an ending is pronounced with the additional syllable.

Examples of /id/ endings for past tense verbs include:

An Exception to the Rule

When the past participle of certain verbs are being used as adjectives, then a second syllable will be added even if the base form does not end in a /t/ or /d/ sound. The "-ed" ending, in this case, is correctly pronounced /id/.

Some of the more common words that fall into this category include:

This only applies to past participles being used as adjectives, however.

Learning the difference between past tense verbs with a /t/ ending and a /d/ ending is more of a challenge. Simply memorizing which letters at the end of the base form of the verb take a /t/ and which take a /d/ does not work for all cases. A more universal approach is needed. ESL students need to learn how to tell the difference between voiced /d/ sounds and unvoiced /t/ sounds.

Examples of /t/ endings for past tense verbs include:

Examples of /d/ endings for past tense verbs include:

While a list of the endings that take /t/ or /d/ sounds will be useful and may also boost the confidence of the ESL students, it is a tool of limited value. Learning past tense endings is like learning anything else-it takes practice!

When learning to pronounce English past tense verbs, the key is repetition. Students need practice that allows them to pick the correct past tense endings for both regular and irregular verbs while allowing them to also hear the differences between the various endings.

With all due respect to Rosetta Stone, one-on-one or group instruction is certainly the way to go when learning a foreign language.

The following sites offer practice exercises, drills and other information useful to ESL students and anyone having issues with English grammar:

Whether the student learns and practices past tenses in a classroom, one-on-one or by self education, the key for success is to learn the basic grammar rules, have lots of opportunities to practice and to have their practice evaluated.