Instructors can benefit from creating ESL gerund games to help students understand the concept of the gerund in an entertaining way. When making grammar exercises into games, students don't have time to dwell on the fact that they're actually learning grammar strategies. 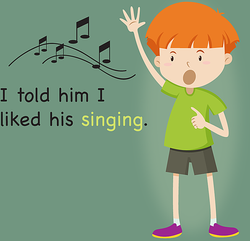 YourDictionary has taken the work out of finding other online ESL gerund game resources. The following links are excellent online resources for students to practice identifying gerunds. All of the links are associated with college and university language programs and contain credible and accurate information.

If you ask your students whether they'd like to take a quiz or play a game, they would probably choose to play a game. When you think about it, however, a game is just a quiz without the negative stigma attached to it.

Turning some of the above quizzes into games will serve two functions:

Don't forget to reward those who excel in the games. Offer prizes that work within the natural structure of your classroom. For example, students could compete for extra credit points, raffle tickets for a future drawing, snacks, bonus free time, or longer recesses.

A gerund is a noun which is derived from a verb with "ing" added at the end of the word to indicate continuing action. Example of gerunds include:

When used in a sentence, the gerund looks like the following examples:

In these sentences, the italicized words are the gerunds.

Gerunds can also function as nouns in a sentence. They can either hold the subject position or the direct object position. Consider the following examples:

In this example, the word dancing is a gerund because it is the subject of the sentence.

Gerunds as Parts of a Noun Phrase

Gerunds can also perform the function of a verb within a clause, yet the clause as a whole can function as a noun phrase in the overall sentence. The following sentences are examples of this use of the gerund:

Dancing a jig is fun and healthy.

Dancing in this example is a verb in the clause dancing a jig, but the overall clause is a noun phrase that functions as the subject of the sentence as a whole.