The History of ESL

The teaching of ESL (English as a second language) began in the 15th century with the advent of England's increased trading and colonization throughout the world. The British were instrumental in developing large scale programs to teach English in their trading countries and colonies. 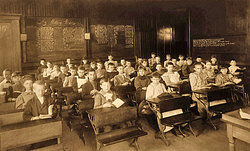 The History of ESL
Advertisement

ESL Education by the British Empire

ESL education began with the rise and spread of the British Empire in the late 15th century. The English had expanded their trade routes and they needed to communicate with those with whom they were trading. English became the lingua franca, the common language, of those doing business with the British. It was not until a few centuries later, however, that formal English instruction came into play.

Teaching English Outside of England

As the British empire continued to grow, they needed a way to communicate with and effectively govern their overseas businesses and colonies. During the next two hundred years, the British sent many teachers overseas to educate a upper-class colonists and local government officials, indoctrinating them with British ideas and culture, including the English language.

The goal of these teachers was to educate this generation in English so that they would grow up and take a place in the government of the overseas country or colony, thereby furthering the empire by passing a British world view down to the lower classes through legislation and local influence.

Because the British understood that the locals would not want to totally give up their local language, they favored a bilingual educational system. This would ensure that those in power would look and sound local, thus gaining the trust and support of the locals, while holding to the beliefs and practices of the British.

As a result of this bilingual approach, English began not only to spread as a second language throughout the world, but also grew as words from foreign cultures were added to the English lexicon.

By the mid-19th century, a new generation of ESL learners were formed as more and more individuals left Europe for what was to eventually become the United States.

History of ESL in the United States

By the middle of the 19th century and into the beginning of the 20th century, the opportunities in the United States had increased multi-fold. Millions of immigrants flocked to the U.S. in the pursuit of life, liberty and happiness.

Most immigrants wound up in large cities, living in ethnic neighborhoods with other immigrants of the same nationality. In such an enclave, a working knowledge of English was not necessary to survival.

Immigrant communities wished to both retain their cultural traditions and participate in American life, and America, having been built on the belief that all men are free to do so, did its best to be accommodating.

Bilingual or non-English instruction popped up in both public and private schools across the nation depending on the culture of the local population (French was spoken in Louisiana, for example, Spanish in Arizona and New Mexico, etc.).

This multi-language orientation in America continued until the late 1800s when the United States, groping for some sense of a national identity and afraid of defeat without it, began to mold all Americans into a cultural standard. This standard included English being considered the primary language of the United States, although it was never declared as the national language.

The Naturalization Act, passed in 1906 was instrumental in mandating the knowledge of English in America. The Act required that all immigrants must be able to speak English in order to become naturalized citizens of the U.S.

In 1914, the Ford Motor Company started an in-house English program for its employees as a part of its controversial $5-a-day wage program. In order for employees to garner the full wage, they were required to meet certain standards of living.

One such standard was that families live in single family homes as opposed to small apartments. This move to individual housing caused employees to move out of their ethnic neighborhoods into neighborhoods where it was critical to be proficient in English in order to speak with their new neighbors. As a company benefit, Ford offered English classes to employees who wished to fully participate in the special wage program.

By the mid-1920s, most states had instituted English-only instructional policies in both private and public schools, which was essentially a form of submersion education for immigrant children. Adult immigrants struggle to learn English on their own in order to gain employment, conduct their daily lives and, eventually become a citizen.

It was not until World War II and just after that the United States began to recognize once again the importance of foreign languages, foreign language education and cooperation with (as opposed to fear of) speakers of other languages, which naturally led to a greater interest in ESL education.

During this time (1950s-1980s), linguists and educators put a lot of effort into researching language, language learning and language teaching, producing a variety of ESL teaching methods that are still used, at least in part, today.

The continued interest in teaching ESL in the schools has been met with support from state and federal budgets to fund for public schools and adult basic education programs nationwide.

ESL Teaching Around the World

Today, there are countless ESL teaching certification programs offered around the globe, combining the allure of world travel with the security of knowing that as long as there are people who don't speak English, ESL teachers will be a valuable commodity.

When you step back to look at the big picture, it's fascinating to see how English has spread naturally and forcibly, for the purposes of commerce and community, as the world has grown smaller and smaller.

The process hasn't always been noble or pretty, but in the end, it has served in small part to join the world together through the gift of communication.