The interlanguage Chinese ESL students develop while acquiring English presents a unique set of challenges for both teachers and language learners. All students working to acquire a second language (L2) incorporate, as part of their learning process, an interlanguage. 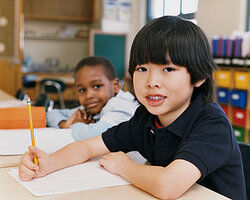 English is a language with a very complicated verb system. Important information in English is performed by auxiliaries and by verb inflections.

Chinese, on the other hand, is an uninflected verb language, meaning that other aspects of the language like word order and adverbials carry out this information.

Also, verbs do not handle the concept of time in Chinese the way they do in English through the use of past and present tenses. Combined with the irregular verbs English uses (I go, I went, I have gone, I will be going), the issue of verb tense is particularly challenging for ESL students whose L1 is Chinese.

For most Chinese ESL students, inter-vocalic pronunciation of /r/ as in the word "hairy" develops easier that word-initial /r/ as in rabbit or post-vocalic /r/ as in car.

In addition, students tend to be able to produce consonant sounds with a higher proficiency when reading a list of words than when telling a story or orally reading a narrative.

One of the fundamental differences between Chinese and English is that Chinese is a tonal language. This means that by altering the pitch of a phoneme sound, a speaker can change its meaning. In English, changing a phoneme’s pitch doesn’t change its meaning, but rather is a technique used to express emotion and enthusiasm.

Unlike the English language, Chinese does not use articles and the interlanguage spoken by students reflects this. These language learners often omit or misuse articles, and this issue is one that tends to linger until the later stages of L2 proficiency. The reason for this lies in the fact that article omission typically doesn’t interfere with the conveying of meaning in the same way that other aspects of the English language do.

For example, the sentence "I need to bring note from doctor" can be easily understood as "I need to bring a note from the doctor." If, however, the same sentence was phrased "I need to bring story from pharmacist" the vocabulary issues would prove to be more problematic than the misuse or omission of articles. Since any language’s primary function is to facilitate communication, those who are learning a new language learn the most crucial aspects first.

Simplification and generalization are inherent traits of any interlanguage. Chinese ESL students are no exception. At the lexical level, general words are substituted for particular words. For example, big rock might be substituted for boulder and horse might be used to describe a donkey or a zebra. At the discourse level, ESL students have difficulty mastering the social contexts in which to use a certain expression or colloquialism.

Issues for the Chinese ESL Student

Chinese and English are very different languages from two different language families. English features a very complicate verb system, the use of articles, and consonant and vowel challenges that all create difficulties for Chinese ESL students. By understanding how the interlanguage is developed by Chinese ESL students provides both students and teachers with specific tools to move continually towards L2 proficiency.