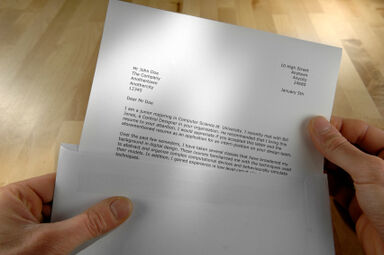 Elements of an ESL Business Letter

There are five main elements to a business letter:

Aside from the regular format conventions, such as two blank rows between each section (four for very short letters) and equal left and right margins, there are also specific characteristics for each section of a business letter.

The heading contains the address from which the letter is being sent. It is important that the address is listed the exact way that the recipient would address a return envelope. Any street locations such as "Avenue" or "Street" should be spelled out.

The last line of the heading should be the date. This can be tricky, and one must be careful to spell out the month, day and year completely.

In Europe, the month and day are reversed from the conventions of the United States.

Using "Avril" instead of the English equivalent is a personal stylistic choice, but unless other elements such as the salutation and the close are also in the language of the recipient it is best to stay with one language.

This is simply the address to which the letter is going. Unlike the heading, however, it does include the individual's name.

Care should be taken with honorifics such as Mr., Mrs., and the like. They should also be spelled out, so that a "Mademoiselle Pellebon" does not become "Mme. Pellebon." In the latter, the honorific actually means "Madame", and that may be quite shocking to the recipient.

American and other English-speaking countries have taken to using the honorific "Ms." to represent a female of unspecified marital status, in order to give them some parity with males (who are always Mister). If personal preference is known, that should always be used, but it is usually safe to use "Ms." in any case.

In the inside address the full name, if known, should be used.

The salutation, like the inside address, should be specific to the preferred honorific of the recipient. Using the first name would be rude unless a very personal relationship is already established.

Using "Dear" before the honorific is considered acceptable in English-speaking cultures, but should be checked with the conventions of the recipient's culture. "To Whom It May Concern" is no longer considered an appropriate salutation due to its extreme coldness and formality, but gender-neutral names such as "Dear Translator" are completely appropriate when the sex of the recipient is unknown.

There are not as many conventions to follow in the body of business letters. For clarity of reading, the text should be single spaced, with double spacing between paragraphs.

In very short letters, it may be appropriate to have the entire letter double-spaced, simply to make the letter appear more balanced on the page.

The close of the letter should be something formal such as "Sincerely" or "With respect," as would befit a business correspondence. Changing to the native language of the recipient is also an allowable convention, as long as it is appropriate - "Avec plaisir," for example, might be too informal unless a personal relationship has already been established.